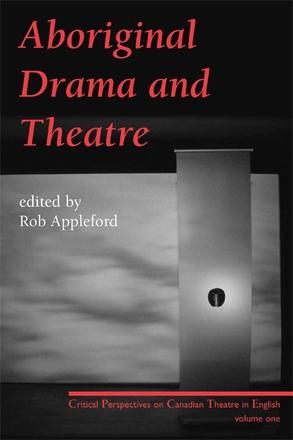 On Native Mythology by Tomson Highway (1987)
Absorption, Elimination, and the Hybrid: Some Impure Questions of Gender and Culture in the Trickster Drama of Tomson Highway by Sheila Rabillard (1993)
The theatre of orphans/Native languages on stage by Floyd Favel Starr (1993)
Receiving Aboriginality: Tomson Highway and the Crisis of Cultural Authenticity by Alan Filewod
'Shine on us, Grandmother Moon': Coding in Canadian First Nations Drama by Reid Gilbert (1996)
Alive and well: Native theatre in Canada by Drew Hayden Taylor (1996)
The artificial tree: native performance culture research, 1991-1996 by Floyd Favel Starr (1997)
Hybridity and Mimicry in the Plays of Drew Hayden Taylor by Robert Nunn (1998)
Selling Myself: the Value of an Artist by Yvette Nolan (1999)
Translators, Traitors, Mistresses, and Whores: Monique Mojica and the Mothers of the Métis Nations by Ric Knowles (2001)
The Beginning of Cree Performance Culture by Geraldine Manossa (2001)
A Handful of Plays by Native Earthlings by Daniel David Moses (2001, 2002)
Daniel David Moses: Ghostwriter with a Vengeance by Rob Appleford (2005)
A Windigo Tale: Contemporizing and Mythologizing the Residential School Experience by Armand Garnet Ruffo (2005)