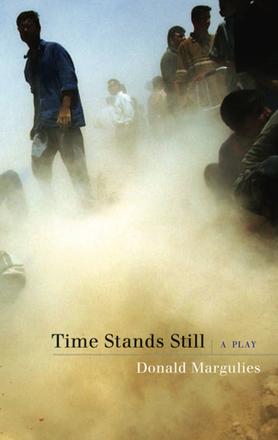 “The play’s two hours fly by as if you’ve barely taken a breath. . . . Ethical dilemmas arise like exploding mines. ”–Variety

“Mr. Margulies is a skilled practitioner of fluid dialogue that is naturally funny and sensibly smart. ” –The New York Times

In his “absorbing intelligent” (Los Angeles Times) and timely new play, Donald Margulies uncovers the layers of a relationship between a photojournalist and foreign correspondent—once addicted to the adrenaline of documenting the atrocities of war, and now grounded in the couple’s Brooklyn loft. Photographer Sarah was seriously injured while covering the war in Iraq; her reporter partner James had left weeks earlier, when the stress and horrors became too much for him. Now James writes online movie reviews while Sarah recovers, mourning for her Iraqi driver (and former lover) killed in the explosion, and itching to get back behind the camera. With this play—coming to Broadway this winter—Margulies revisits themes of being an artist, as characters ask: What does it mean to capture suffering on film, rather than stopping to intervene?

Donald Margulies received the 2000 Pulitzer Prize for Drama for Dinner with Friends, which has been produced throughout the world. Other plays include Sight Unseen (OBIE Award), Brooklyn Boy, and Collected Stories, among many others.