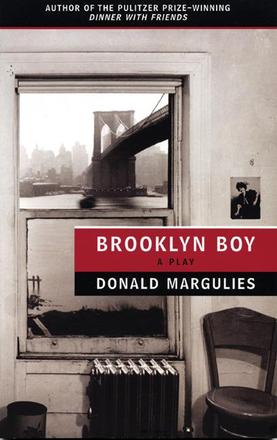 “Those who know Margulies’ plays will find his familiar themes here: the inevitable transformations wrought by aging, the complex hands linking parents and children, the uneasy dance between commercial and artistic success. The story unfolds with an uncanny resonance that distinguishes all great theatre.”—Orange County Register

This new play by the Pulitzer Prize-winning author of Dinner with Friends is slated for a Broadway run in January 2005. Brooklyn Boy follows the career of Eric Weiss, a writer whose novel hits the bestseller list the same time his life begins to unravel. His wife is out the door, his father is in the hospital and his childhood friend thinks he has sold himself to the devil. A funny and emotionally rich look at family, friends and fame.

Donald Margulies received the 2000 Pulitzer Prize for Drama for Dinner with Friends. The play received numerous awards, including the American Theatre Critics Association New Play Award, the Dramatists Guild/Hull-Warriner Award, the Lucille Lortel Award, the Outer Critics Circle Award and a Drama Desk nomination, and has been produced all over the United States and around the world. In addition to his adaptation of God of Vengeance, his many plays include Collected Stories, Sight Unseen, The Model Apartment, The Loman Family Picnic, What’s Wrong with This Picture? and Two Days. Mr. Margulies currently lives with his wife and their son in New Haven, Connecticut, where he teaches playwriting at Yale University.