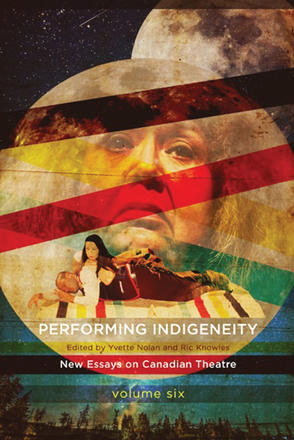 Fyrst, An Introduction by Yvette Nolan

Sovereign Proclamations of the Twenty-First Century: Scripting Survivance Through the Language of Soft Power by Jill Carter

Kippmoojikewin: The Things We Carry With Us by Marrie Mumford

On the Trail of Native Theatre by Carol Greyeyes

Saints and Strangers: A Rapprochement for Indigenous Performance by Michael Greyeyes

Bringing Forth the Sacred, Speaking for the Spirits: A Brief Braid by Andréa Ledding

A Comedic History of Aboriginal Proportions by Drew Hayden Taylor

“That’s Who the Stories Are About”: Cree Ways of Knowing in Kent Monkman’s Miss Chief: Justice Of The Piece by June Scudeler

Tricksters and Creatures and Ghosts, Ho-Lee! Intimations/Imitations of the Sacred by Daniel David Moses

She Begins To Move by Michelle Olson

This volume of newly commissioned essays about Indigenous performance is the first in which all of the contributors are Indigenous artists or academics. Scholars were invited to write essays on some aspect of Indigenous performance and artists were asked to contribute statements on whatever they felt was important to them as theatre creators. As with any good assembly of like-minded members, themes and observations emerged, dovetailing and echoing each other, touching on theatre training, cultural identity, Indigenous theatre history, and claiming space, among others. A companion to the existing two-volume anthology Staging Coyote’s Dream, the authors gathered here—identifying as Cree, Mohawk, Creek, Ntlakapamux, Stó:lo, and many other nations—open a conversation, inviting more voices to join in illuminating the history of Indigenous performance in Canada and blazing a trail forward. Contributors include Tara Beagan, Jill Carter, David Geary, Carol Greyeyes, Michael Greyeyes, Falen Johnson, Michelle La Flamme, Jani Lauzon, Andréa Ledding, Daniel David Moses, Marrie Mumford, Starr Muranko, Yvette Nolan, Michelle Olson, Dylan Robinson, June Scudeler, Jason Woodman Simmonds, and Drew Hayden Taylor.