Colleen Wagner was born in Alberta and studied at the Ontario College of Art and at the University of Toronto. Her writing includes screenplays, stage plays, poetry, and short fiction. Her first play, Sand, was shortlisted for best international play at the Royal Exchange Theatre in Manchester, England. Other plays include Governor General’s Literary Award–winner The Monument, which has been translated into a dozen languages and continues to be produced internationally; The Morning Bird (published by Scirocco Drama); down from heaven (nominated for a MECCA award for best new play); and Home (published by Scirocco Drama). Her recent documentary play The Living, based on stories of survivors in post-conflict zones, premiered at the SummerWorks Performance Festival in 2015 and won the NOW Audience Choice Award and will be published by TalonBooks in spring 2019. She co-founded and was co-artistic director of the NotaBle Acts Theatre Company in Fredericton, NB, from 2002 to 2007. She divides her time between a riverside farm in New Brunswick and downtown Toronto and teaches at York University. Visit www.colleenwagner.ca for more information. 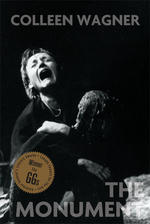