Heidi Schreck is a playwright and two-time Obie Award-winning actor. Her play What the Constitution Means to Me premiered at New York Theatre Workshop in 2018 to critical acclaim and will transfer to Broadway in 2019. Her first play, Creature, was produced in New York by New Georges and Page 73 in 2009. Her play There Are No More Big Secrets premiered at Rattlestick Playwrights Theatre in 2010 and was a New York Magazine and Time Out New York’s Critic’s pick. The Long Wharf produced her dark recession-era comedy, The Consultant in 2014. A former Page 73 Playwriting Fellow and Sundance artist, Schreck has received commissions from South Coast Repertory Theatre, Manhattan Theatre Club/Sloan Foundation, and True Love Productions. Her play Grand Concourse was produced Off-Broadway at Playwrights Horizons in 2014. She has also performed extensively at theaters such as The Public (Shakespeare in the Park), Manhattan Theatre Club, Two-Headed Calf, The Foundry, Clubbed Thumb, The Women’s Project, The Roundabout, Williamstown, Berkeley Rep and Center Theatre Group. On television, Schreck has appeared on The Good Wife, SVU, and Showtime's Nurse Jackie, where she has also worked as a writer. Schreck was Playwrights Horizons’ first Tow Foundation playwright in residence 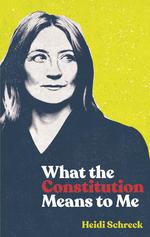