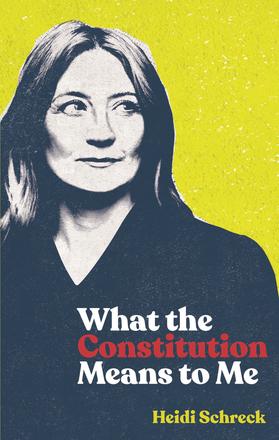 When she was fifteen years old, Heidi Schreck earned money for her college tuition by giving speeches about the U. S. Constitution. Decades later, she traces the effect this document has had on four generations of women in her family. Deftly examining how the United States’ founding principles are inextricably linked with our personal lives, Schreck also explores the ways in which their misuse has engendered violence and inherited trauma. With passion and wit, this galvanizing new play acknowledges the ways in which our Constitution has failed us while simultaneously offering hope that we may yet steer ourselves toward a better future.

"In this dire moment of cultural fragmentation, Schreck is offering an oasis of connection, a place where humanity and learning are being celebrated and protected. "

"A masterful act of storytelling, blending unflinching vulnerability, nimble humor, and acute analysis to inspire revelation. It's a play that expands beyond itself, offering an immensely powerful model for modern civic theater. "

"The show offers a compelling mix of earnest sweetness and thundering mountaintop fury. "