One of the major theatrical artists of the 20th century, Italy's Dario Fo, togther with Franca Rame, his wife and creative partner, have been creating a theatrical foray uniquely their own for more than fifty years. One of the world's most produced playwrights, Fo was awarded the 1997 Nobel Prize for Literature. 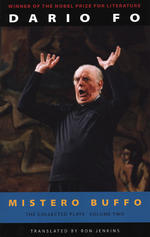