Shamia Chalabi is a London-based writer and actress working in theatre and TV.

Her semi-autobiographical play, Burkas and Bacon Butties, based on some of her personal experiences growing up in London and Wigan, was first performed at part of the 2018 VAULT Festival, London. It was later developed as a new play, Habibti Driver, premiered at the Octagon Theatre, Bolton, in 2022. 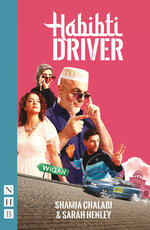