Even though Hannah Moscovitch’s most recently published play takes place in the 1920s, it still has powerful notes that ring through to the current fight for birth control. In What a Young Wife Ought to Know, a young working-class girl named Sophie falls madly in love with and marries a stable hand named Jonny. After several difficult childbirths, doctors tell Sophie she shouldn’t have any more children, but they don’t tell her how to prevent getting pregnant.

In this scene, Sophie and Jonny go from marvelling at their first born to realizing they can’t enjoy sleeping with one another without dangerous consequences.

Right away I had a dear little girl born large, nine pounds, named Katherine—Kitty—after my ma.

JONNY enters with the baby.

SOPHIE: She will be, when she’s had a few more days of life.

SOPHIE: The house smells of blood.

JONNY: I could smell it through the door while you laboured: it scared me.

SOPHIE: The sheets are stained.

JONNY: Did you think it would be clean, to labour?

SOPHIE: I am proud of her. And she is pretty, I think.

Then there was the first one named George after my da. He only lived a half an hour owing to it was a case of the baby or me. I had a nurse by me—for the doctor cost so much—but a doctor had to be called— and I will say I had a Black doctor for he was the cheaper and I was very well attended by him. I had to have the instruments put on and then the Black doctor, he said, “Well, girl, we can’t go on like this any longer.” I said please, please not to kill the baby. Ma said, “They’ll be other ones—lie still or this’ll put a hole in your bladder.” The doctor gave me the chloroform, and then he crushed the baby so it would come out. We christened that one George and buried him in a small plot near Alma. It was too bad for a second child, I felt the love towards him come: I was a young mother. Then there was the second one named George and this one lived, though he cost me great pains. The doctor—he was not Black, the Black doctor moved to Toronto more’s the pity—this doctor was old and had drink and mint on his breath, and I looked up at him in the tenth hour of my labouring and there was blood on his sleeves up to the collar. There were rags of flesh come down, and a prolapsed womb that led to an operation, in hospital.

There’s a storm, the sound of rain.

JONNY and SOPHIE are kissing. Then as the sexuality escalates, SOPHIE disentangles herself, pushes JONNY gently away from her. Beat of them still, then:

SOPHIE: In his cot—I’m sorry, Jonny—

Then, scuffing the floor:

JONNY: The floor’s turned to mud.

It’ll give you pain?

JONNY: For how long?

SOPHIE: I think the doctor meant a while.

SOPHIE: He told me I had insides quite exhausted and he dearly hoped I didn’t have any more children.

SOPHIE: We have the two?

SOPHIE: That’s what he said.

SOPHIE: Yes, and a child would get no nourishment from my womb, he said.

JONNY nods to himself and gets up.

SOPHIE turns and looks at JONNY.

He was looking at her, but he looks away.

How were the stables?

JONNY: One of the horses went lame.

No one came by to fix the floor?

JONNY gets down on the ground and starts cleaning up the rain hole in the floor, sopping it up with rags or newspapers.

SOPHIE: (re: his work on the floor) I think you’re making it worse.

SOPHIE gets down on the floor too.

When physical contact between them happens—hands touch— JONNY backs away and stands up.

JONNY: Is it all right if I go out for a little?

SOPHIE: For what? For a cigarette?

I’d heard of certain articles, at the druggists, but when I went and looked at them, they were more than a dollar each, and Jonny was only giving me fourteen a week then, and with rent, and paying down my surgery at the hospital . . . It was called the rubber sheath, and could be used for one month, as long as you washed it out afterwards with soap and water and took only the best care of it. Its name on the packet was the “Canadian Royal Guard” which was a sort of . . . humour? And God only knows if it worked, for I asked the druggist and he said that there was a disgrace about the factory that manufactured them: the rubber was defective and weak, leftover from the making of boots, and the devices caused inflammation. And the druggist took his glasses off and come around from behind the counter and asked me why I wanted such a thing that was mostly only used for misconduct, and was I having an immoral going-on? So I asked among my neighbours, the wives, in the tenement, to find out if they had any knowledge of what to do.

Want to keep reading? Get your copy of What a Young Wife Ought to Know now! 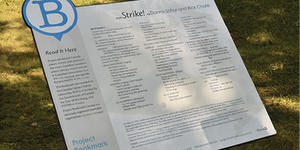 Strike! The Musical honoured in Winnipeg 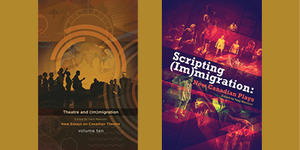 On creating, collecting, and studying immigrant theatre in Canada