Larissa Volokhonsky was born in Leningrad. She has translated works by the prominent Orthodox theologians Alexander Schmemann and John Meyendorff into Russian. Together, Richard Pevear and Volokhonsky have translated Dead Souls and The Collected Stories by Nikolai Gogol, The Complete Short Novels of Chekhov, and The Brothers Karamazov, Crime and Punishment, Notes from Underground, Demons, The Idiot, and The Adolescent by Fyodor Dostoevsky. They were twice awarded the PEN Book-of-the-Month Club Translation Prize (for their version of Dostoevsky's The Brothers Karamazov and for Tolstoy's Anna Karenina), and their translation of Dostoevsky's Demons was one of three nominees for the same prize. They are married and live in France. 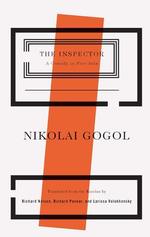