Somalia Seaton is a British-Jamaican and Nigerian playwright and screenwriter, born and raised in South-East London. 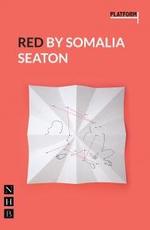