J.T. Rogers’ plays include Blood and Gifts, The Overwhelming, White People, and Madagascar. He was nominated for a 2009 Olivier Award for his work as one of the original playwrights for The Great Game: Afghanistan. He is a 2012 Guggenheim fellow in playwriting. Other recent awards include NEA/TCG and NYFA fellowships, the Pinter Review Prize for Drama, the American Theatre Critics Association’s Osborne Award, and the William Inge Center for the Arts’ New Voices Award. 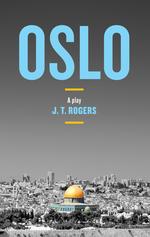