Iman Qureshi is an award-winning writer for stage, screen and radio.

Her stage plays include: The Ministry of Lesbian Affairs (Soho Theatre, London, 2022); The Funeral Director (winner of the 2018 Papatango New Writing Prize; premiered at Southwark Playhouse, 2018) and Speed (Kali Theatre at the Tristan Bates Theatre, 2013). Her short play His and Hers (Soho Theatre) was produced as part of Tamasha's New Muslim Voices. Her play for young people, Side Effects, was performed at Canary Wharf Roof Garden and Poplar Union.

She has been writer in residence at various schools, and her short play Birthday Begum, written in residence at Mulberry School for Girls, was performed at Rich Mix and Theatre Royal Stratford East. She was shortlisted for Soho Theatre's Tony Craze Award in 2017. 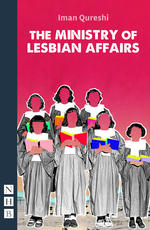 The Ministry of Lesbian Affairs