Anthony Perpuse mostly goes by Tony and uses he/him pronouns. He is a Toronto-based Filipino Canadian actor who received his B.F.A. in Performance Acting from the (then called) Ryerson Theatre School in 2016 and was awarded the Perry Schneiderman Comedy Award. Some of his theatre credits include Theory (Tarragon Theatre), Eraser (Eraser Theatre), Through the Bamboo (Uwi Collective), and Orestes (Tarragon Theatre), while film credits include Workin’ Moms, Save Me, The 5th Estate, and Run The Burbs (CBC); VHS ’94 (Hangar 18); and The Handmaid’s Tale (HBO). He received a Dora Mavor Moore Award nomination in 2019 in the Theatre for Young Audiences Division for Outstanding Production, Outstanding New Play, and Outstanding Ensemble with Eraser Theatre (for this play!). 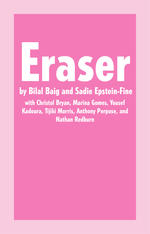