Jeannette Nelson trained as a singer and dancer at the Arts Educational School, then worked in theatre and cabaret for ten years in Britain and around the world. In her late twenties, she took a degree in English at Queen Mary, University of London, and then trained as a voice teacher at the Royal Central School of Speech and Drama.Jeannette taught for many years at the Guildhall School of Music and Drama, as well as working as a voice and dialect coach in theatre, film and television. Besides the National Theatre, where she has worked since 1992, becoming Head of Voice in 2007, she has been resident voice coach at Shakespeare’s Globe, the Royal Shakespeare Company and Sydney Theatre Company, Australia. She has also worked on many productions for other British theatre companies in London’s West End and leading regional theatres.As a voice and dialect coach in film and television, her work includes the films The Merchant of Venice (with the cast, including Al Pacino, Jeremy Irons and Joseph Fiennes), Kingdom of Heaven (with Orlando Bloom) and Wuthering Heights (with Juliette Binoche). Her most recent work in television includes The Hollow Crown (with the cast, including Benedict Cumberbatch, Philip Glenister, Keeley Hawes, Sally Hawkins, Sophie Okonedo and Tom Sturridge). 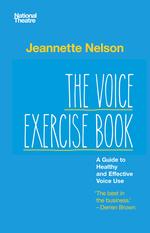