Daniel Macdonald is a playwright, director, and educator. His plays have been produced and workshopped in Canada and the United States. Pageant premiered at the Alberta Theatre Projects playRites Festival and has been produced in Regina, Fort MacMurray, and Austin, Texas. MacGregor's Hard Ice Cream and Gas premiered at Persephone Theatre in Saskatoon and has been produced at Prairie Theatre Exchange (Winnipeg), Ship's Company (Nova Scotia), and Shadow Theatre (Edmonton). His play Velocity was part of the Lark Play Development Center's Playwrights Week 2007 in New York and was part of the Saskatchewan Spring Festival of New Plays. He has written several pieces with and for high school students including the dramas Waking and Tragedie. He also wrote several short pieces for the Globe Theatre's On the Line series (12 Menus, Negotiations). Macdonald is a recipient of the Regina Writer's Award and is a two time recipient of the SIMPIA (Saskatchewan) award for film acting. Daniel is past president of the Saskatchewan Playwrights Centre and has served on its board for eight years. He lives, writes, and teaches in Regina, Saskatchewan. 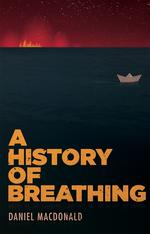