Robert Edward 'Bob' Larbey (1934–2014) was a writer best known for his work with John Esmonde. Esmonde and Larbey were the British television comedy scriptwriting partnership behind popular sitcoms during the 1970s and the 1980s such as Please Sir!, The Good Life, Get Some In!, Ever Decreasing Circles, and Brush Strokes. 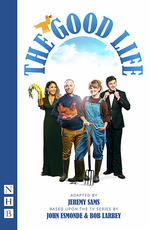