HYWEL JOHN trained as an actor at LAMDA. His credits include Rupert Goold’s award-winning production of Macbeth with Patrick Stewart, which played in the West End and on Broadway. He has worked at the Chichester Festival Theatre and the Bristol Old Vic Theatre. He runs the innovative theatre company MahWaff that exists to produce theatre that is challenging, accessible, entertaining and relevant. Pieces is his first play. He lives in London. 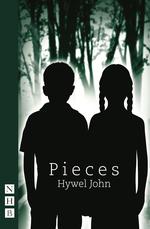