Michael Grant is an award-winning playwright who began writing out of necessity. He needed a script about maple syrup. Since then he has gone on to write five one-act plays and six full-length plays with more to come. His work has been produced across Canada. His first full length, Hamish, is part of the Grassroots play anthology. His third play, Shorthanded, received the Stage West Comedy Award in 2012. Other titles include Suburban Standoff and Shorthanded: A Ladies Game. He lives in Elmira, Ontario, with his wife Sherry and his three children. 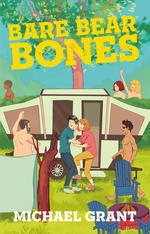