Tim Foley is a British playwright based in Manchester.

He won the 2016 OffWestEnd award for Most Promising New Playwright for his play The Dogs of War. 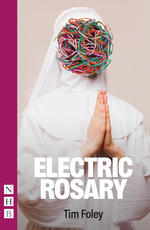