He also writes for TV and film and was nominated for a Bafta Craft Award in 2016 for his work on The Last Hours of Laura K. 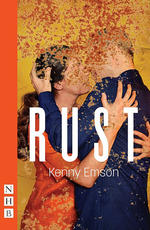