Katherine Chandler is an award-winning writer working in theatre, film and television.

She was awarded the inaugural Wales Drama Award by the BBC and National Theatre Wales and won the Judges' Award in the 2013 Bruntwood Prize for Playwriting with Bird. She also won the Writers Guild Playwright Award at the 2013 Theatre Critics of Wales Awards. 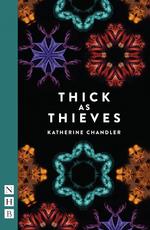