Allan Boss has worked on many projects, both regionally and nationally, as a producer and director for the CBC. Boss worked with Ghost River Theatre on their production of An Eye for an Eye, which was chosen to represent the CBC at Wordplay 2007, and was broadcast internationally. Boss's Ideas program "Updrafts" was nominated for the Peabody, New York Festivals, Gabriel, and Prix Italia awards. With a Ph.D. in drama from the University of Calgary, Boss has shaped the history surrounding Mavor Moore's life and work. 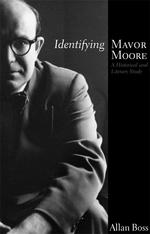