Stephen Adly Guirgis is an American playwright, screenwriter, director, and actor. He is a member and a former co-artistic director of New York City's LAByrinth Theater Company.[1] His plays have been produced both Off-Broadway and on Broadway as well as in the UK. His play Between Riverside and Crazy won the 2015 Pulitzer Prize for Drama. 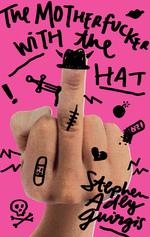 The Motherfucker with the Hat