Meet the author of the epic new trilogy—The Empire—Susanna Fournier!

Describe yourself in one sentence.
A Jedi-loving child turned artist-adventurer-writer person still trying to understand how to have a body and why it is that humans can’t seem to find a more inspiring collective vision for our species.

Tell us a little bit about your new book.
The Empire is a trilogy of plays that spans 500ish years of invented history in a world eerily familiar to our own. Think The Handmaid’s Tale meets Band of Brothers meets Dog Whisperer meets whatever Virginia Woolf would have written if she was a spec-fiction showrunner for HBO.

What’s something unique about you or something you like to do?
I have a freckle in my right eye that may or may not open portals to other dimensions. If you don’t hear from me next week, it’s because I’m rock climbing in a quasar no one can find.

What does your happy place look like?
Meditating. I can do that anywhere, so everywhere can be a happy place. I’m also pretty darn giddy at the bouldering gym when not losing my grip on finger-shredding crimp holds.

What are some of your favourite plays?
The Supine Cobbler by Jill Connell, Pandora’s Box (LULU) by Frank Wedekind, Danton’s Death by Georg Büchner, Revolt. She Said. Revolt Again. by Alice Birch, and 4.48 Psychosis by Sarah Kane.

What are you reading these days?
I swing wildly from Italo Calvino’s fictional romps to Buddhist suttas, to books on space and (whatever I can parse from) astrophysics, to histories of kung fu, and travel books about Thailand.

What’s something that makes you laugh?
Do you mean besides existence?

Learn more about Susanna Fournier:
Susanna Fournier is an award-winning writer, theatre maker, actor, and educator based in Toronto. She is most known for writing texts for live performance, visioning interdisciplinary productions, and that gig she had in that X-Men movie. She is the artistic producer of PARADIGM productions, an indie company she started in 2013 to produce rowdy, joyous, contentious, and “impossible” theatrical works. Her work has played in Toronto, Dublin, London, Berlin, and Munich, and is known for its formal experimentation and wild spirit. She is currently the playwright-in-residence at Canadian Stage. 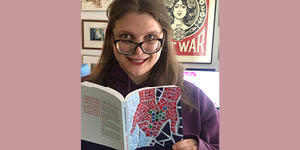 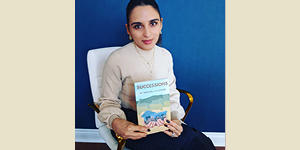