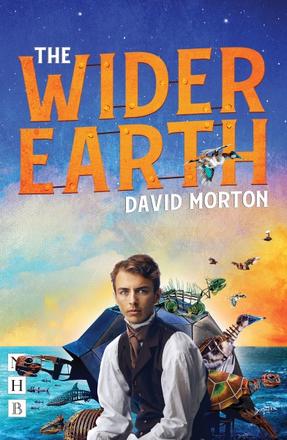 In 1831, Charles Darwin, a twenty-two-year-old aspiring naturalist, stepped on board HMS Beagle. Little did he realise that the voyage would last five years, changing not only his own life – but also the history of the entire world.

The Wider Earth brings this era-defining adventure to life, from traversing the dizzying heights of the Andes to diving into the depths of the Brazilian rainforest, through weathering the storms of Tierra del Fuego, to exploring the endless wonders of the Galápagos Islands.

It's a coming-of-age story about science and faith – of how one inquisitive young man asked a question of Mother Nature, and was set on course to discover the answer to one of the greatest mysteries of life on Earth.

Originally performed in a dazzling state-of-the-art production with remarkable puppetry and cinematic animations, the powerful story at the heart of The Wider Earth will inspire schools, colleges and amateur theatre companies to create simpler – but no less spectacular – stagings of their own.

"No praise could be too high for The Wider Earth. " —The Australian

"Has an epic quality… a family-friendly account of Darwin’s five-year voyage. " —Evening Standard

"A grand voyage that will take audiences to wondrous places they’ve never been to before. .. an adventure full of wonder and magic. Not to be missed. " —The Upcoming

"The Wider Earth brings the colourful and exciting world of Charles Darwin to life once again in a show that's going to bewitch experts and laymen alike. " —Broadway World