In this video interview prepared for the Canadian Association for Theatre Research’s annual conference, playwright and actor Makambe K Simamba spoke to author and screenwriter Catherine Hernandez about her soon-to-be-published play Our Fathers, Sons, Lovers and Little Brothers.

In Our Fathers, Sons, Lovers and Little Brothers, a seventeen-year-old Black boy in a hoodie suddenly finds himself in the first moments of his afterlife. He goes on a sacred journey through the unknown, grappling with the truth of the life he lived and the death he didn’t choose.

Makambe was inspired to write the play when thinking about Trayvon Martin and how he is looked at as a martyr figure, and instead wanted to investigate what his experience would be like from his own psychology.

“You know, in this day and age when so many lives are reduced to just a hashtag, what I loved so much about the play is this idea of giving humanity to a person behind the headlines,” said Catherine, who was the artistic director of b current performing arts during the play’s premiere production.

Makambe agreed. “It breaks my heart that, you know, when we see Black folks who have died, especially Black folks who have been murdered to white supremacy, we see their names as hashtags. We remember them for the deaths they didn’t choose more so than the lives that they lived and the things that might have brought them joy. So it was really important for me to explore and connect with, in whatever way I could, like, what was this young person interested in? And also, what does it mean to be seventeen? That’s a really special and beautiful age where there’s a huge wave of new independence and what feels like maturity. But also you’re still a child.”

To hear more about Makambe’s creative process, the importance of connecting this play with Black youth, how the pandemic has affected her work, and a short reading from the play, watch the full interview:

About Makambe K Simamba
Makambe K Simamba is a Dora Award–winning playwright and actor for Our Fathers, Sons, Lovers and Little Brothers. Other plays include A Chitenge Story, The Drum Major Instinct Trilogy, Makambe Speaks, and MUD. Select acting credits include A Chitenge Story, inVISIBLE, GIANT, Bea, Winners and Losers, and SIA. She is the 2020/2021 Urjo Kareda Artist-in-Residence at Tarragon Theatre. She recently co-directed inVISIBLE (Too) at the University of Lethbridge and is a resident member of the artist-run theatre company ARC. Makambe is proudly Zambian, and her intention is to be of service to her community through her ability to tell stories. She is based between Calgary and Toronto.

About Catherine Hernandez
Catherine Hernandez (she/her) is an award-winning author and screenwriter. She is a proud queer woman who is of Filipino, Spanish, Chinese, and Indian descent and married into the Navajo Nation. Her first novel, Scarborough, won the Jim Wong-Chu Award for the unpublished manuscript; was a finalist for the Toronto Book Award, the Evergreen Forest of Reading Award, the Edmund White Award, and the Trillium Book Award; and was longlisted for Canada Reads. She has written the critically acclaimed plays Singkil, The Femme Playlist, and Eating with Lola and the children’s books M Is for Mustache: A Pride ABC Book and I Promise. She recently wrote the screenplay for the film adaptation of Scarborough, which is currently in post-production by Compy Films with support from Telefilm Canada and the Reel Asian Film Festival. She is the creator of the Audible Originals audio sketch comedy series Imminent Disaster. Her second novel, Crosshairs, published simultaneously in Canada, the US, and the UK this spring, made the CBC's Best Canadian Fiction, NOW Magazine's 10 Best Books, Indigo Best Book, Audible Best Audiobooks, and NBC 20 Best LGBTQ Books list of 2020. Her third children's book, Where Do Your Feelings Live?, a guide for kids living through these scary times, has been commissioned by HarperCollins Canada and will be published in winter 2022.

Want to read the play? Pre-order your copy of Our Fathers, Sons, Lovers and Little Brothers now! 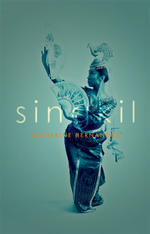 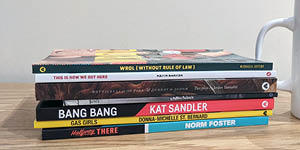 Want to read plays together? Start a book club! 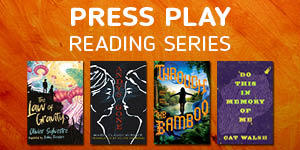 Press Play Reading Series: The Law of Gravity, Andy's Gone, Through the Bamboo, and Do This In Memory of Me