It’s so much fun to be bad

Erin Shields reflects on her journey with Paradise Lost

The talk of this year’s Stratford Festival was without a doubt Erin Shields’s adaptation of Paradise Lost. So much so that it’s become our fastest-selling book ever! Erin’s witty, feminist portrayal of John Milton’s epic poem about the battle between good and evil is wickedly entertaining, as its comments on society ring almost too relatable today. The Toronto Star calls Erin’s adaptation “irreverent, extremely funny and stingingly contemporary.”

Now, the original Paradise Lost is a monolith—the second edition of the poem fills twelve books—so the fact that anyone would decide to take an adaptation on is impressive. But what you might not know is how much time Erin has spent with the work.

Read on in our interview about her relationship to the piece, how she came to adapt it, and who she’d play if she could!

This isn’t your first tango with Paradise Lost. Can you explain your relationship to the piece?

While I was forging my way as a young theatre-maker in Toronto after graduating from a conservatory acting program at Rose Bruford College in London, England, I decided to do a part-time degree in English Literature at the University of Toronto. In my third year, I enrolled in a course to study John Milton through an intertextual study of Paradise Lost and Scripture. My professor, Dr. Paul Stevens, really cracked Paradise Lost for me. He approached it with respect, but also a healthy dose of irreverent humour. His passionate, often provocative lectures led us on a journey through the text.

Paradise Lost stayed with me after that course. The theatrical potential beckoned to me and I made a couple of pieces, before this one, using Paradise Lost as source material. With the support of the Ontario Arts Council, I co-directed (with Lisa Pijuan-Nomura) a thirteen artist multi-disciplinary interpretation of Paradise Lost. Through theatre, modern dance, puppetry, stand up comedy, flamenco, bouffon, tabla, electronic music, storytelling, and spoken word, we led thirteen artists in an integrated investigation of the text. The piece was presented in a cabaret style event at Lula Lounge in Toronto. Five years later, I wrote a one-woman show which examined the idea of Original Sin from a feminist perspective. Finally, I decided I was ready to take on the whole poem and proposed a contemporary, theatrical adaptation to the Stratford Festival.

When thinking about writing a new adaptation, what was immediately clear that you needed to include or incorporate?

Adapting a classical text, as I have done many times before, is an act of interacting with an author who is no longer alive. I work to understand the author’s intent and, at the same time, consider my own relationship to the material, examining the text through my own Canadian, contemporary, female lens. It is a process of negotiation between staying faithful to the author’s intent and asserting my own opinions. The choices are both big and small. Milton, for example, transformed the Garden of Eden into an English garden. I have transformed it into a Canadian wilderness, specifically the woods of Northern Ontario where I spent my summers as a child. The mighty pines, the Canadian Shield, the blueberry bushes, the cry of the loons on the lakes—this is my paradise. Milton’s portrayal of the gender dynamics between Adam and Eve reflects his time. My Adam and Eve reflect mine in that I have endeavoured to create an equitable power dynamic between them, an equality which is ultimately undone by the Fall and Eve’s punishment. Also, my rebellious Satan is female and she speaks to directly to our contemporary secular audience, telling this iconic story from her perspective, contextualizing it for our time.

Paradise Lost is often held up as The Greatest Work of English Literature, so that was an intimidating place to start! Milton was blind when he wrote Paradise Lost and therefore dictated the epic poem, so I decided the best place to start would be to read the text aloud—in some manner channelling the way in which it was originally written. Like Shakespeare, Milton’s text resonates in the body, so reading it aloud gave me a deeper understanding of the text. As I went, I took periodic breaks in the reading to respond with writing. Monologues, scenes and characters emerged which had one foot in the past and the other firmly entrenched in today.
I gave myself permission to bend the story and language—staying true to what I felt to be the drive of Milton’s work, but freeing up the details.

If you could play a part in the tale, which character would you want to be and why?

Satan. Obviously. The poem (and my play) is told from Satan’s perspective. Satan rebels against God, is punished for her revolt and devises a masterful plot of revenge. She is active but also contemplative; selfish, but desperate for love; relatable but also bulging with incomprehensible evil. In short, Satan is a complicated, irresistible protagonist, and I wanted to explore that journey from a perspective closest to my own. In doing so, I have not sought to reduce Milton’s expansive story to a contemporary, feminist parable. Rather, I have endeavoured to situate the central conflict of the play in a female body as a means of challenging our assumptions about the archetypes we have inherited. In exploring Satan through a female lens, I hope to both reflect our current time in which women everywhere are speaking truth to power and create a complex character with whom every audience member, irrespective of gender, can identify. Also … it’s so much fun to be bad! To give that opportunity to an extraordinary actress, has filled me with wicked delight.

What’s next for you?

Right now, I’m taking on Shakespeare (all of it, yikes!) for Repercussion Theatre here in Montreal. I am exploring Shakespeare’s heroines, the under representation of women in his plays, and the cost of those numbers on a society that’s still obsessed with The Bard. 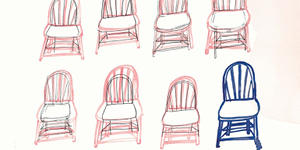 Read an excerpt from The Gay Heritage Project