For the bravery of women

Leah Simone Bowen on the history behind The Flood

In Canada in the 1800s, women were property and could be imprisoned for any reason. Jail was considered a place for the criminal, the disabled, the mentally ill, and the marginalized. In The Flood, Canadian history buff Leah Simone Bowen gives a fictional voice to their little-known stories, creating a haunting story of stamina and survival.

Leah is no stranger to delving deep into Canada's history as one of the creators and hosts of the popular podcast, The Secret Life of Canada. The Flood is inspired by true accounts and the history of Toronto's St. Lawrence Market, which is now a popular place for locals and tourists to shop at farmer's and antique markets.

Below, Leah explains more of her curiosity, research, and intentions behind The Flood. Read on for her fascinating insights!

What inspired you to write a play about imprisoned women in the 1800s?

After I had learned there used to be a prison in the basement of St. Lawrence Market I began to get curious. The St. Lawrence Market is not a place you would expect to find a jail but it was attached to Toronto's city hall and there was a holding cell below. People would be walking above prisoners being held in terrible conditions while they were enjoying their day, doing trading and shopping. To me that image perfectly encapsulates so much of Canada's troubling history. We ignore what's just below the surface.

How did you conduct your research?

The story of the play and its characters are fictional. The play is inspired by historical accounts and jails across Canada. I wanted to make sure it felt rooted in this time period. I spent a lot of time in Toronto libraries and archives and I would often visit the St. Lawrence Market. Most of my research looked into the Canadian penal system as a whole and a lot of that revolved around the Kingston penitentiary. Corrections Canada is like any other government structure in Canada, at its core it is a colonial system. I saw a strong connection between the institutionalizing of Indigenous children through residential schools and then later in many lives the institution changed to corrections Canada. Similarly with Black people, many people of African descent were slaves on this land and then over subjected to the criminal justice system. That has not changed today. Women were written about in a generalized way or not at all in a lot of documents I found and so I became obsessed with trying to discover who the women were that had been put in jail in Canada and why. Prison seemed to be used as a catch all. Women who committed crimes were incarcerated but so were poor women or ill women and just liked today women of Colour, Indigenous and immigrant women. The more I researched I found a correlation between the women who were in prison then, to the women in prison now.

From your research, can you tell us a bit about what Toronto was like in the late 1800s?

Just like in the rest of Canada it was a tumultuous time; so many things were happening. By the 1830s some churches had begun to establish the Residential School system. By the 1880s the Canadian Government had adopted the practice of stealing Indigenous children. Hundreds of thousands of Irish Immigrants were landing in Toronto trying to escape the famine, and Toronto became a new home for many Immigrants. African Americans fleeing slavery were pouring into the city as well as Black loyalists and they were trying to centre themselves in a city that did not welcome them. Despite this, black businesses were popping up all over the city. It was a clash of cultures and Toronto was very much segregated.

You also co-created/host a podcast on forgotten Canadian history—when/why did your interest in the subject start? What fascinates you?

To be honest, I have no idea how I ended up delving into so much history in my writing. It just kind of happened, I would be researching some current event and then end up down rabbit holes trying to see how it connected in history. I have discovered that time and again that if you want to figure out today and how to change it, look to yesterday. That is what The Flood is really about. The character of Irish Mary was inspired both by Irish domestics at the time and some of the horrific treatment they faced and also the story of Julie Bilotta, an inmate in Ottawa in 2012 who was forced to give birth in jail alone.

I'm always fascinated at the bravery of women. I read some of these stories of women fearlessly organizing, pushing the envelope and quietly subverting in time periods that I can't even imagine the amount of courage it would have taken. Similarly, I am very connected to the stories of women who survived and persevered by simply staying alive.

What do you want people to take away from this play?

It was not so long ago women in Canada had no rights, that colonialism fractured marginalized people to their core and it also divided them. I want people to understand that history is complicated and painful but we must engage with it anyway if we want to truly see each other's experiences. In the end though, I want people to walk away thinking that despite all of this, there is hope.

Need to know what happens to the women in The Flood? Get your copy now! 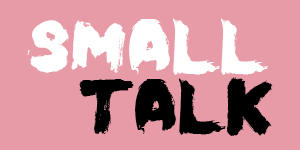 Read an excerpt from Small Talk 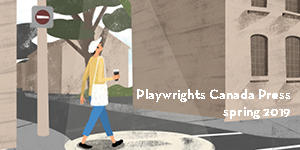