Michael Bray trained at RADA and worked as an actor on stage and screen, before moving into writing and directing for television and film. His films as writer/director include The Sea Change, starring Ray Winstone, which was premiered at the Sundance Film Festival. He has taught screen acting at many leading drama schools, directed hundreds of students' final-year films, and is currently Course Leader at Drama Centre, Central Saint Martins, part of the University of the Arts London. His book So You Want To Act On Screen? is published by Nick Hern Books. 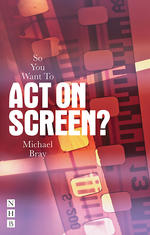