Leon Aureus is an actor, playwright, and producer. He is the founding artistic director of The Gum San Theatre Company which blossomed into the fu-GEN Theatre Company in 2002. Banana Boys is his first play and was also fu-GEN’s first full production. The play’s development paralleled the exciting growth of the company, neither of which would have been possible without the vision, dedication, hard work, and brilliance of his fellow ‘fu-GEN’ers Nina Lee Aquino, Richard Lee, and David Yee. He thanks and cherishes them for being on that journey with him. He also wrote and directed the short film Friends Like These and co-wrote the play People Power (for the Carlos Bulosan Theatre Company). Born in Quezon City, Philippines, he immigrated to Canada at a very young age, growing up in Toronto’s East End (a few blocks away from the kids of Degrassi), and the ’burbs of Mississauga—but never forgetting his roots. Well maybe a little… or even a lot. But it’s that continuing path of searching and discovery that keeps him writing and creating. He currently lives in Toronto’s Annex neighbourhood where the rowdy drunken college kids also keep him (up) writing and creating. 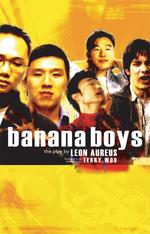