Karen Ardiff is a Dublin-based actress who has performed on every major stage in Ireland. In Skagway, her first play, was produced by Guna Nua Theatre Company and the Civic Theatre Dublin under the title The Goddess of Liberty. It won the Irish Playwrights and Screenwriters Guild Best New Play Award, the Stewart Parker/BBC Northern Ireland Award and was nominated for the Susan Smith Blackburn Prize. Karen is also the author of an acclaimed novel, The Secret of my Face. 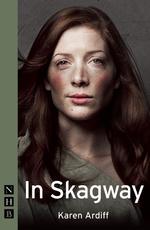